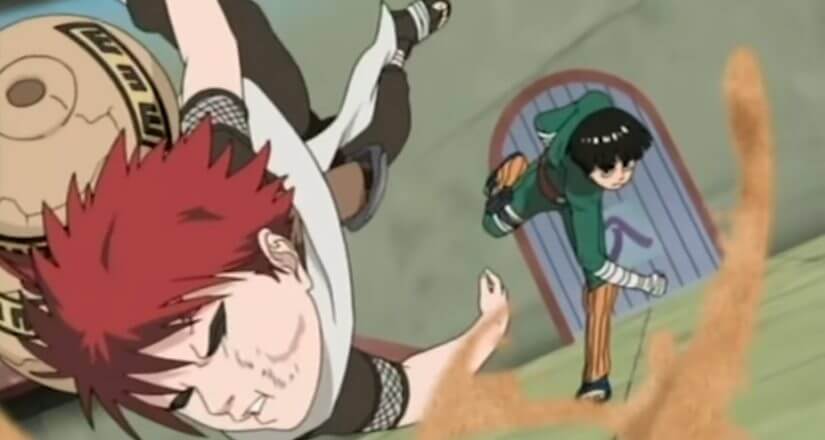 Naruto is a series that depends entirely on high octane moments in between the somber scenarios.

These high octane moments are to live for though, there is hardly anything else that is as thrilling as watching Naruto fight Sasuke, or watching Kakashi go up against Itachi; yet still the battle between Gaara and Rock Lee remains one that will never leave our memories.

The fight between Gaara and Rock Lee was so fun to watch, and an absolute randomized master class in Shounen anime action that it is forever placed in everyone’s memory.

So, what episode does this fight take place in? Who are Gaara and Rock Lee? Who wins the fight and what is the aftermath?

What Episode Does The Fight Take Place?

The fight between Rock Lee and Gaara happens at the very start of the series, during one of the earliest episodes.

The fight starts when a very hasty Gaara challenges Rock Lee, who is comparatively much tamer than Gaara and has a brief conversation with his teacher before he actually goes in to fight Gaara!

Gaara of the Sand; is a shinobi from Sunagakure. He has similarities to Naruto, because he was made the jinchūriki of the One-Tailed Shukaku before he was even born, so he had no choice in it.

Just like Naruto, the villagers of Suna would consistently always fear Gaara as a monster.

However unlike Naruto, Gaara didn’t have a strong presence of idols and brother figures, due to which he never could connect to anyone and grew up hating everyone in the world while being a selfish killer.

A brief encounter with Naruto gives him a dynamic shift in perspective though, and eventually he becomes Suna’s Fifth Kazekage and protects the very same people that he hated.

Who is Rock Lee?

Rock Lee on the other hand, is a highly skilled shinobi from Konohagakure’s Lee clan. He is also a member of Team Guy, learning everything he has from none other than Might Guy himself!

The thing about Rock Lee that makes him different is the fact that he doesn’t have any skills that would help him in using or creating ninjutsu or genjutsu.

So, Rock Lee’s entire focus is shifted towards Taijutsu and he puts all of his efforts into learning Taijutsu from Might Guy.

By the end of his arc in the series, he becomes a Taijutsu Master while still being a Genin.

What Is The Aftermath of the Fight?

The fight is absolutely fierce, with both competitors going to their absolutely maximum point as they could.

However, in the middle it is revealed that Rock Lee was wearing weight restrictions which caused him to be much slower, when he takes them off; he begins to land hits on Gaara.

However, Gaara still has some tricks left up his sleeve and he manages to defeat Rock Lee.

This battle ignites the passion to grow ten times better within Rock Lee. It also helped Gaara realize that he isn’t the strongest person in the world, and if he is then the rest are catching up to him.