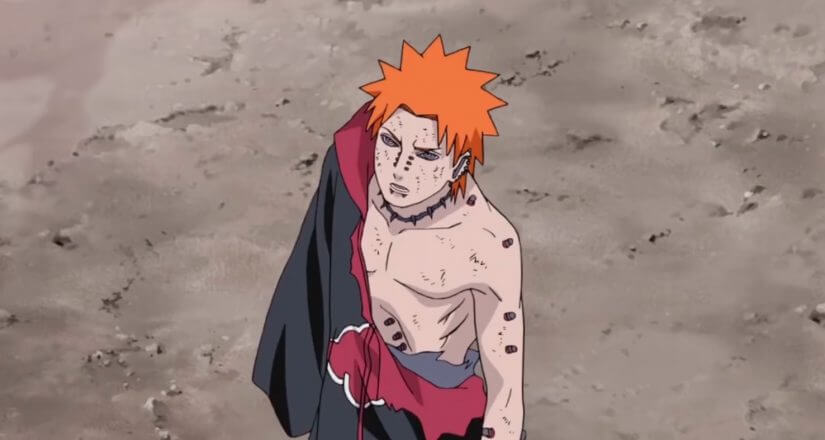 When does Naruto fight pain?

The fight between Naruto and Pain is still to this day considered one of the most iconic moments in the history of not just Naruto, but all anime.

The fight was a conclusion to one of the largest going feuds in the anime, and gave us some of the most historic moments from both Naruto and Pain.

It’s also interesting because the two characters is very complicated, mainly because they are both people who want peace.

Yet Pain’s way of acquiring it isn’t moral, so Naruto stands against him and fights him to protect the people he loves most.

This leads to one of the most epic fights in anime history.

Who is Pain in Naruto?

Pain, was originally known by his real name Nagato. Nagato was a shinobi of the Amegakure and he was a descendant of the Uzumaki clan, same as Naruto. He formed the Akatsuki with his friends who were also war orphans just like him.

Alongside Yahiko and Konan, Nagato’s entire purpose was to make the world a better place. He dreamt of peace in this chaotic world full of Shinobi warfare on all fronts.

However, it all changed once Yahiko died. Nagato and Konan formed a new Akatsuki, their purpose was still to bring peace and order, however they were willing to use any deadly or brutal methods necessary.

Nagato also adopted the alias of Pain, which was his sheer strength.

His entire arc in the story leads up to him witnessing and feeling other people’s pain, his empathy was his strength.

Yet after the death of his friend Yahiko, his own pain overcame any moral purpose he had before.

Now for the topic at hand; the fight between Naruto and Pain. The fight happens right after the “Pain’s Assault” arc.

It is a long fight, taking place over seven different episodes to fully cover it. The fight starts at episode 163 and ends at episode 169.

Though if you are asking more specifically about the one on one combat between Naruto and Pain, most of it happens in the episode titled “Planetary Devastation”.

This is the 166th in the series, and is also the fourteenth episode in the seventh season of Naruto.

Fans reaction to Naruto Vs Pain

Although the fight and the whole arc itself was well received by most of the population. There are still people who had a lot of negative thoughts about the fight, most complaining that it was poorly animated.

There are people complaining about the animation by pointing out specific half second shots and saying that it looks badly drawn or animated.

Though if you are pointing that out in Naruto, you should also notice that some of the most popular anime like One Piece and Bleach also have moments such as that.

No matter how many anime you bring up to the table, none of them will have the most perfect animation and there will always be one or two moments that you can easily point out as poorly animated.

Watch the fight on youtube here, and judge for yourself!