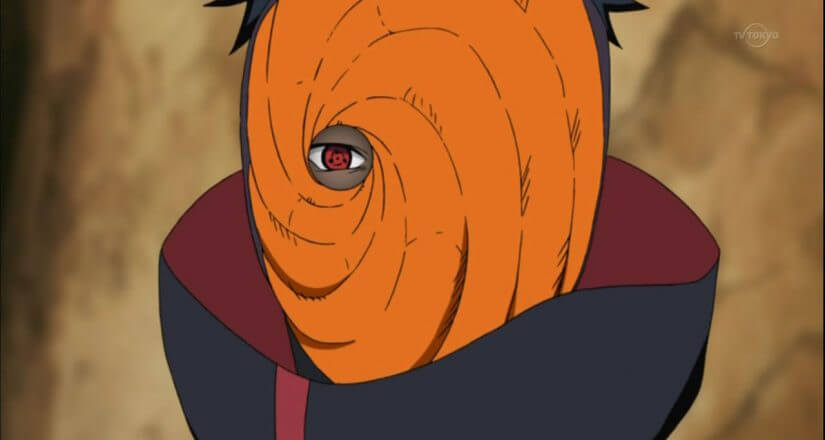 Obito Uchiha was one of the members of the Konohagakure Uchiha clan. Everyone believed that Obito Uchiha had died during the Third Shinobi World War.The only legacy that Obito left behind was the sharingan that he left for his team mate, Kakashi Hatake.

However, the truth was that Obito had been saved from death by Madara Uchiha. Madara then took Obito under his wing, giving him the alias of Tobi. Madara also left his illusionary, wrong and downright repulsive teachings of an ideal world upon Tobi.

He turned Obito into someone and something that he never was, cruel. So, who is Tobi really asides from an alias for Obito?What’s Tobi’s background and how does his character develop in the story? Let us explain!

Obito grew up without really knowing who his parents were, he knew their names and all that but he was primarily raised by his grandmother.

He always felt alone in the world, and his only dream was to become Hokage at some point so that people would acknowledge his being.

He became a great rival and friend of Kakashi Hatake upon joining the academy, he was later placed in a team with Rin Nohara and Kakashi Hatake.

During the Third Shinobi World War, Obito, Kakashi and Rin were sent on a mission to destroy a bridge. Kakashi was in charge of the operation and things were going well. However, they got ambushed by Iwa-Nin and Rin was taken.

Obito forced the idea of going back for her but Kakashi refused and said the mission was more important. Obito went on his own, saying Kakashi was Trash for abandoning his friends.

After some harrowing events, Kakashi almost fell under a lot of rubble and died, but Obito pushed him out of the way and took the damage upon himself.

The right side of his body was crushed, and he had no way to free himself. He accepted his fate, and left his Sharingan to Kakashi as an apology for not listening to his commands.

Obito was saved by White Zetsu, he was given strict orders by an elderly Madara Uchiha.

He was brought to the Mountains’ Graveyard and there he was treated and healed.

White Zetsu removed all of the body parts that were too damaged to heal and replaced them with limbs that were created from the cells of Hashirama Senju.

He was no indebted to Madara Uchiha, and had no choice but to listen to his proposal.

What Happened After He Became Tobi.

After the natural death of Madara Uchiha, Obito resurfaced under the names Tobi and Madara Uchiha himself. He thought it right to give credit to his mentor for the plans and ideas that were his creations.

Tobi used his subtle persuasions to take control of the Akatsuki from within, and he used them as a means to further his agenda. After a short while of preparation, he went public and started the Fourth Shinobi World War.

However, lucky for the rest of the star cast of characters; as the end of the war was nearing, Tobi had a change of heart. He refers to himself as Obito after ages and as a loving act of atonement; sacrifices his life in order to save the world that he sought to completely replace. Talk about development at its best!

That’s all the relevant, spoiler-free information that you need to know about Tobi (Also known as Obito Uchiha and ALSO known as Madara Uchiha) from Naruto Shippuden!