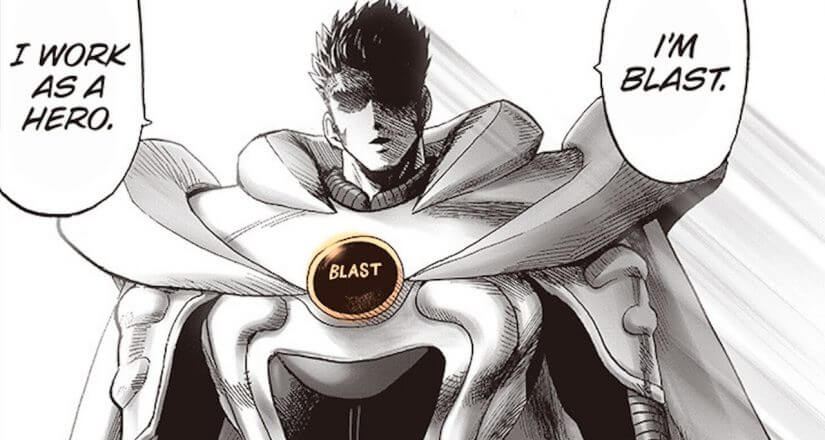 Who is Blast in One Punch Man?

Blast is a very complicated character, with a ton of history in the manga. Blast’s character goes through some harrowing arcs in the Hero Association Saga, but we’re not going to dive too deep into that that would be completely spoiler territory.

We for sure don’t want to spoil any of One Punch Man for anyone here, so go watch or read it yourself. However, let us tell you a bit more about Blast’s character, his looks and his abilities!

Blast is a large dude, he is over six feet five with a super muscular build. His spiky hair is beginning to grey out, and he has a slight beard which is also greying out now.

His armour is huge, with bulky shoulder pads, padding on his wrists and legs and knees.

He wears a large cape, it has a torn out pattern at the bottom making it seem old and worn out.

There is an emblem of his name “BLAST” on his chest on a large button, and at the back of his shoes. Oh, and he also wears cool guy glasses!

He seems to have a really reserved personality, never giving any private information about himself or his whereabouts to the Hero Association.

Blast’s work ethic is somewhat like Saitama’s; in essence he considers the hero work as a hobby and not a duty or necessity.

Once after rescuing Tatsumaki, he tells her to use her own powers and to defend herself instead of waiting for others to come rescue her every time something happens.

Not to mention, he is merciless when it comes to humans that he thinks are evil. So no matter whom the person is, if they commit a despicable crime; Blast will not be kind.

Blast has an incredible natural speed and his reaction time is also quite astonishingly quick.

This was showcased in the series when he dodged Flashy Flash’s fastest kicks at a close range and far appeared away behind him in the distance, showing that he is fast in both the physical and mental situations.

He also has an incredible amount of speed. If One Punch Man didn’t have Saitama, Blast would be considered an overpowered character.

He can be seen carrying around The Mysterious Cube like a Rubik’s Cube, twisting and doing tricks with it on his fingertip. Meanwhile Flashy Flash’s hand got stuck under it and he couldn’t pick it up.

Blast’s actual super-hero ability is his Inter-Dimensional Travelling. He possesses an ability which allows to create portals to different dimensions out of thin air and use them to teleport himself, others or transfer objects to different places.

These Inter-Dimensional Portals seems to look like Black Holes, with dark and endless colors being shown in within them. When he uses these portals, he clasps his hands together; making an infinity symbol and a portal in front of him.

He’s seen using these when he tries to teleport himself, Flashy Flash, Saitama, and Manako.

That’s all the relevant, spoiler-free information that you need to know about Blast from One Punch Man! He seems like a very well developed and complex character in the manga, which means that it’s going to be extra fun once the anime reaches the part where he appears.